St Athan Airfield formally known as RAF St Athan, is situated in South Glamorgan, Wales, and has been a base for aerospace activity for more than half a century. Over recent years the site has been developed by the Welsh Government, who’s primary role, is working towards Civil Aviation Authority (CAA) accreditation of the airfield.  As part of this programme of transition of the estate, from military to civilian use, the site has benefitted from a newly resurfaced runway and also a Cat 1 ILS system. Focus was made on the control and operation of the airfield lighting, and subsequently atg airports were contracted to upgrade the existing airfield lighting control system.

As this was a former military base, the control of the airfield ground lighting equipment was achieved via a Modular Control System (MCS) that has been operational for many years. It was deemed that it would beneficial to upgrade the MCS to the latest Mk4 system with some additional functionality that was seen as a necessity for airport operations.

With the future in mind, the system was configured in order that new services, when required, could be added with minimal engineering time and disruption. As part of this consideration, a passive LCD mimic screen was installed, replacing the older push button mimic panel. As the airport evolves over the coming years, the graphical representation of the airfield, and the associated lighting patterns, will prove to be easier and quicker to refresh than the old style hard-wired mimic panel.

Taxiway circuits on military airfields were generally powered by a Transformer Mains Supply electronic (TMSe) which only have the capability to provide two stages of brilliancy via a D22 contactor unit. Subsequently the TMSe units were replaced with Micro200 Constant Current Regulators (CCR’s), and the MCS modified to control and monitor the individual regulators. Again, additional hardware was configured which will enable new taxiways circuits to be connected when they come into service.

An additional facility in the VCR was provided to monitor the standby generators that are positioned at each substation. The controller in air traffic will now have true status indication of the generators and be made aware if they are in “run/stop” mode, the status of fuel level, and if there are any general alarms that may prevent the equipment being brought on line when required.

A copper ring is utilised to communicate between the substations, which can make the telemetry control equipment vulnerable to voltage spikes, particularly during lightning storms. To help prevent this, surge arrestors were installed on all telemetry and direct wire services. 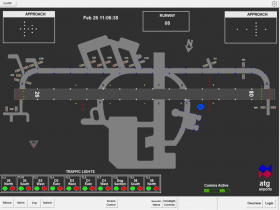 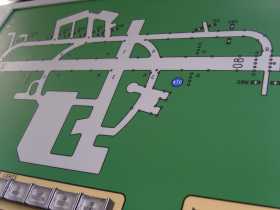