In the North East of Scotland, RAF Lossiemouth is one of two QRA stations that contribute to the defence of the United Kingdom’s airspace. This airbase is home to four squadrons flying the Eurofighter Typhoon, and is also due to accommodate the newly delivered P-8A Poseidon Maritime defence patrol aircraft.

As part of the £350M enhancement of RAF Lossiemouth the redevelopment of the runways was essential to facilitate the larger and heavier Poseidon aircraft. Resurfacing works were one of many improvements being made to future-proofing the Scottish base for years to come. Other improvements include a new Air Traffic Control Tower, upgrades to drainage and electrical supplies.

ATG airports were successful in securing the contract to provide a full turnkey solution for the refurbishment of the airfield lighting system and associated infrastructure. This was not limited to just the renewing of the Airfield Ground Lighting runway and taxiway circuits, but the upgrade of the lighting from tungsten halogen to modern LED fixtures. Other changes included the replacement of all the airfield signs including the, Illuminated Runway Distance Markers (IRDM’s), and the RHAG marker boards associated with the aircraft arrestor system.

There are four substations on the airfield that house the Constant Current Regulators (CCR’s), Cable Termination Panels (CTP’s) and low voltage (LV) distribution boards. All of these locations benefit from a complete fit out of the LV distribution equipment including switchboards, isolators change over switch, service sockets and lighting.

A flight control caravan is used at the end of an active runway to monitor the approach aircraft and electric system for four runway ends associated with the caravan position had to be accommodated for with in the rewire of the airfield.

Once the electrical infrastructure in each building was complete, the modifications for the AGL control system could be implemented. As the system had already been upgraded to allow for three stages of brilliancy on the taxiway lighting circuits, the scope was limited to the addition of control circuits for new taxiway routes, the newly installed runway guard lights, and operation of new traffic light equipment at many locations around the airfield.

New improved apron standing for the aircraft was a requirement of the development project, and subsequently new apron floodlighting was a necessity to ensure that aircraft can be serviced and maintained at all hours of the day with adequate illumination. It was the responsibility of ATG turnkey solutions team to supply, mains feeder pillars, the associated supply cabling in line with the manufactures specifications and complete the installation of this equipment.

For most of the work, which started in May 2020, aircraft continued to operate from RAF Lossiemouth. However, it was necessary that for a short period of time, aircraft had to operate from another airbase while the intersection between the two runways was resurfaced. Works continued night and day, seven days a week to allow the aircraft and their crews to return to the operational base as soon as possible. As a defence critical project, work also continued despite the difficulties presented by coronavirus, with various safety measures taken to make the site COVID secure. 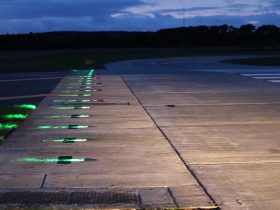 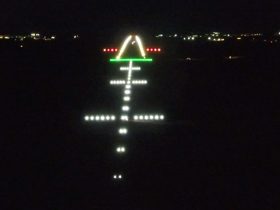 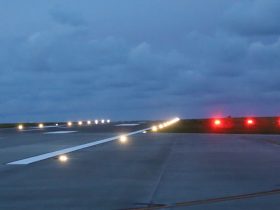 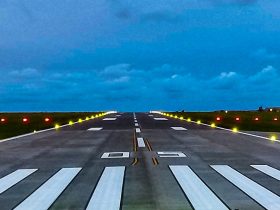