Over recent years RAF St Athan has been developed by the Welsh Government, who’s primary role, is working towards Civil Aviation Authority (CAA) accreditation of the airfield.  As part of this programme of transition of the estate, from military to civilian use, the site has benefitted from a newly resurfaced runway and also a Cat 1 ILS system.

The airfield lighting control system had in the past few years been converted from a MK3 to Mk4 Modular Control System (MCS) which is being implemented across the military airfields. In addition to the Mk4 upgrade, a soft mimic had been installed in the VCR, giving the operators a visual overview of the lighting pattern selected.  With new airfield lighting services being installed, and also traffic lights being replaced by runway guard lights, consideration was given to replace the MCS with a new airfield lighting control system to provide a more flexible control solution. The SMARTPLC control system was the choice of the client as it offered additional benefits to the user, and also compatible with the soft mimic that was already installed.

The main scope of the works was to design and manufacture the control panels that would be situated in the substation and interface to the constant current regulators (CCR’s) and other plant equipment. As the CCR’s used on site was a mixture of Micro100 and Micro200 regulators, the units were modified so that they would communicate via Modbus TCP in a dual redundancy configuration.

Bespoke software would be written to ensure that the lighting applications functioned in accordance with the client’s requirements. The Software also interfaced with the existing maintenance SCADA and additional alarms pages on the SCADA would be provided so as to indicate to the users any failures within the system.

The main challenge on the project was to ensure that the communications between all the substations and control tower was reliable. At all military sites, the use or a multipair copper cable is used between control centres and the MCS would communicate using frequency shift keying between the locations. As the airfield control ring cables over the years have dilapidated, the airports generally upgrade to a fibre optic ring. This is an expensive option, however the main copper ring at this site was still in a good condition. Subsequently DSL extender switches were installed in order to create an ethernet copper ring between the A centre and the two sub-stations.

The old MCS system which had be in place for over 25 years was removed and the SMARTPLC system was installed and commissioned by the atg airports engineering team. As the airfield continues to develop the client now has the comfort that the new system can expand with their aspirations. 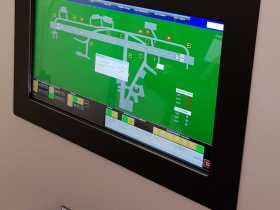 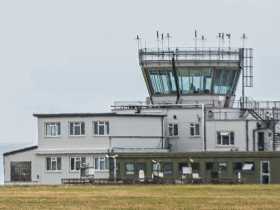